Get vaccinated on game day at the New York Yankees or New York Mets stadium and your baseball tickets are yours. Andrew Cuomo, the governor of the fourth most populous state in the US, made such an offer to New Yorkers today. This is one of many new initiatives to motivate Americans to get vaccinated against Covid. In New Jersey and Washington, people can get beer for vaccinations.


Local and state politicians are promoting the events at a time when vaccination rates in the US are falling rapidly, while polls show that a significant portion of the population is still reluctant to get vaccinated. Since mid-April, the average number of newly filed benefits has fallen from more than 3.3 million a day to less than 2.2 million, and authorities at all levels are looking for ways to increase demand.

On the day it’s played

“If you get the vaccine, they’ll give you a free ticket to the game,” Governor Cuomo said today, summarizing the terms of the promotion that involved New York’s two biggest baseball teams, the Yankees and Mets. The New York Times explains that the stadiums of these clubs are also currently used as a vaccination center and in order to get a ticket, a person must be vaccinated in one of them on the day the game is played there.

“If that game is sold out, you can come the next night. You go to the game you choose,” New York Yankees manager Randy Levine added during a news conference with the governor.

Elsewhere, they are luring with “injection and beer” initiatives. “Every New Jersey resident who gets their first dose of vaccine in May and takes their vaccination card to one of the participating breweries will get a free beer,” Governor Phil Murphy announced Monday. He revealed the list of more than ten beer producers involved in the project.

In the US capital, the announced event is only for one day and only applies to those who get vaccinated on Thursday afternoon at the Kennedy Center for the Arts near the White House. As in New York’s stadiums, the Johnson & Johnson vaccine will be used there, so there’s no need to schedule a date for the second dose to be administered.

President Joe Biden also spoke on Tuesday about the need to motivate hesitant Americans in similar ways, when he announced a “new phase” of the vaccination campaign. “We work with large companies such as supermarkets to offer special promotions such as discounts for customers who come to the stores to get vaccinated,” he said. 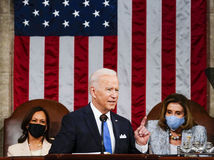 read more In a speech to Congress, Biden praised vaccinations and presented a plan for families