BERLIN. The final of the European Basketball Championship 2022 will take place on Sunday at 8.30 pm. Two old rivals France and Spain meet in the match.

While “Les Bleus” easily defeated Poland in the semifinals 95:54, Spain’s “La Roja” had to resist the power of Germany, which they eventually beat in 96:91.

The French showed their strength on rebounds in the semifinals. They are the fifth best rebounding team in EuroBasket (38.1 rebounds per game). In the game, they had up to nineteen more rebounds than the Poles.

It will be a repeat of the 2011 European Championship final in basketball, when the Spaniards enjoyed their triumph. We can say that the roots of the rivalry were planted in this final.

Leaving aside the 2017 tournament, in the last six years of EuroBasket, at least one of these two teams has always made it to the final.

“La Familia”, as the Spaniards call themselves, could count on the Gasol brothers for many years at international tournaments.

Together they won two silver medals from the Olympic Games, gold from the 2006 World Cup in Japan, as well as two gold, a silver and a bronze medal from the European Championship.

Pau Gasol particularly shone at Euro 2015, with 40 points and 11 rebounds in the semi-final against France. The Spaniards then won the gold and the French the bronze.

Today, Spain has another sibling – the Hernangómez brothers.

Both were there to win the gold medal of the 2019 World Basketball Championship and the bronze medal two years earlier. The eldest of the Willy brothers already has one gold from EuroBasket. In 2015 he won it at a tournament in France.

The Spaniards came back from a deficit of at least 10 points in every match in the knockout stage to turn the game around. The French advanced in the round of 16 and into the quarter-finals only after a dramatic end in extra time.

The last time the two teams met competitively was in the quarter-finals at the Rio Olympics, where the Spaniards beat the French by 92:67. It was Tony Parker’s last game for France.

The only players who played then and will play in Sunday’s final are Rudy Fernández, Willy Hernangómez, Rudy Gobert and Thomas Heurtel.

VIDEO: From the semi-final between France and Spain at the 2013 European Basketball Championship

“I’m so proud to play with this team in this tournament. We’ve already secured a medal. I remember everyone was counting on us to go into the play-offs.

Now we just have to have fun and enjoy the game. France is a great team and we want to enjoy this final,” Real Madrid quarterback Rudy Fernández revealed after the semi-final.

On the other hand, point guard Evan Fournier did not expect to see Spain in the final. But he also paid tribute to them for the work they do in a country where basketball is the second most popular sport. 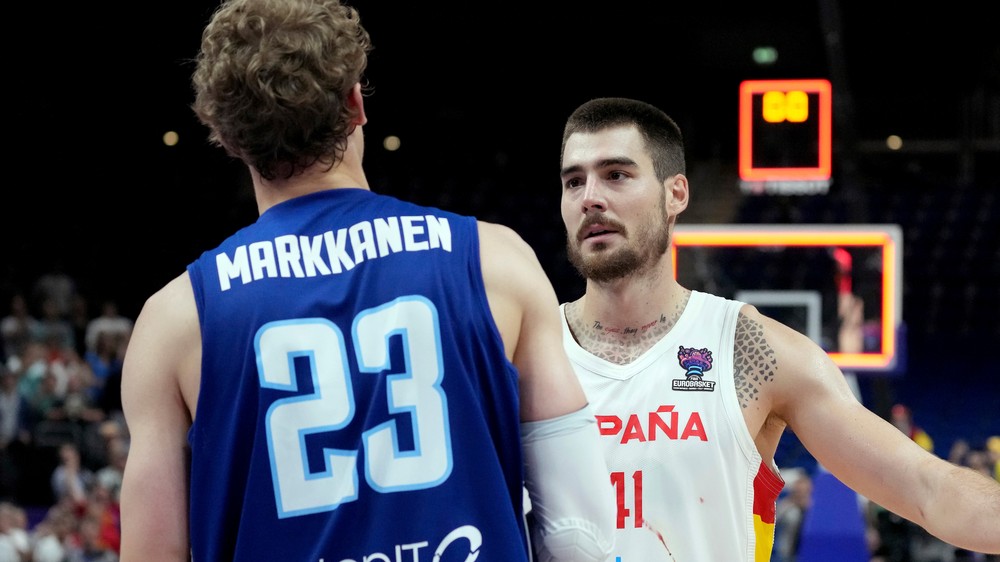 “When I went to EuroBasket I didn’t think they would get this far, but you can never write Spain off. They have a way of playing.

They have a program that has been successful for years. It’s kind of their first year of rebuilding and we didn’t expect them to play at that level,” French quarterback Evan Fournier revealed.

“To be honest, the night before such a big game, even before a semi-final, your mind works a lot. That makes it harder to fall asleep. You really have to relax and do what works for you.

Even on a game day, it’s usually harder to take a nap. Also eat, your appetite is not that big. It is a stress problem and a normal reaction. I hope I can sleep tonight,” Fournier told Eurohoops.net.

“We have a group of players who want to win. We are working very hard to get to this position. When we started the preparation, the goal was to win a gold medal.

Now we’re in a position to do it, there’s one game to go,” explained Rudy Gobert from the French pivot and Minnesota Timberwolves rookie after the semifinals.

The Spanish national teams have had a very successful year. At EuroBasket 2022, the national men’s team awaits this country’s ninth final of this calendar year.

“This is the ninth final this summer for Spain. I don’t know if we can name this number. Spain put the team in the final in every competition,” Spanish coach Sergio Scariolo revealed.

The Spaniards are in second place in the FIBA ​​ranking, while the French are in fourth place.