German football representative Marco Reus should make it to the World Cup in Qatar this year. His ankle injury is not as serious as it first seemed.


Marco Reus on a stretcher.


“Saturday’s investigations did not reveal a fracture. He has injured tires, but that should not jeopardize his start in the championships. He will be out for three or four weeks,” said Borussia Dortmund sporting director Sebastian Kehl.

The 33-year-old attacking midfielder injured his ankle during Saturday’s derby with Schalke (1:0) and was removed on a stretcher after prolonged treatment on the pitch.

He covered his face and cried as the crowd gave him a cheering round of applause from the stands. After the game, his teammates from the locker room also greeted him and posed with his jersey.

Due to an ankle injury, Reus was unable to participate in the 2014 World Cup, where the Germans won gold medals.

He was absent from the Euro 2016 in France due to a groin injury.

Although he played at the “2018 World Cup” in Russia, where the Germans failed to break through from the starting group, he went on to miss last year’s continental championship again. 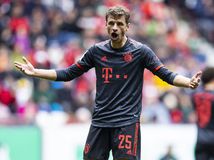 Read also Bayern’s troubles in the league continue, they fell with Augsburg! Giant was injured